Q & A: How Can You Use Notebooking for Math?

Nicole sent me an email with a great topic to discuss here at The Notebooking Fairy. Thanks, Nicole! 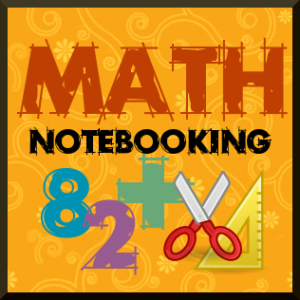 Q: How do you use notebooking in math?

I am living in Belgium and I am homeschooling my 3rd grader. I just read your ebook Notebooking Success and want to thank you. It’s lovely and has some very good points. But I am still puzzled how notebook about math. We need to learn time tables now. But I hate rote memorization. This is where notebooking should come into place, but I can’t imagine how. Do you have some hints for me?

A: With math you want to consider alternate ways to represent the facts.

You can certainly “just” copy the math facts, for example making your own multiplication charts. But that borders on the rote memorization that you are not a fan of (I’m not either). So think of additional ways to demonstrate math facts in math notebooks:

Multiplication is fairly easy to represent with illustrations. Let’s take 4 x 5=20 as an example. Draw four plates of five carrot sticks each. Actually draw the plates with carrot sticks (on them). Then note the addition below the plates 4+4+4+4+4=20 or 4×5=20.

Adjust your illustrations and word problems with things that your child can relate to. In America it may be a six pack of chicken nuggets for the x6 facts. If the number matches the object in some way, all the better (legs on a cat for the x4 facts, legs on an octopus for x8 facts). But it can be anything — cookies, pencils, bicycles, birds, etc. Let your child select the objects to draw, and be sure to allow silliness. Humor goes a long way towards motivating children. So if she wants to draw three headed monsters, go for it!

When working with large numbers, you may want to offer a shortcut with rubber stamps or stickers to make the task easier. After all, who wants to draw 56 carrot sticks for the math fact 7×8?

If you would like more examples of math notebooking, see this Flickr set of photos from my daughter’s math notebook.

Once I’ve taught a concept I’ll give dd a notebook page divided in two horizontally. On one half she’ll solve the problem and on the other she’ll explain how she solved it. This involves puttingbthe method, rule, formula or whatever in her own words.

A “trick” for mutliplication is to draw lines and then count the intersecting dots. For 3×5 draw three vertical lines, then five horizontal lines crossing them. Put dots on all the places where the lines cross, then count them. Or make rectangles on graph paper and count the squares inside – will make area very familiar when you get to that!

I think one way to incorporate notebooking and times tables would be to write multiplication rhymes. Sometimes, I have my students to write a rhyme and draw an array for each problem missed on their multiplication fact tests. I can see maybe creating a lapbook of (for example) the eight facts by writing a silly little jingle or rhyme for each one. For example: Eight times eight is sixty-four; I mop and sweep the dirty floor! Then illustrate it. Last year one of my students jokingly wrote: Three times eight is twenty-four; shove the teacher out the door! Needless to say, the whole class always remembered that fact.

Hi Jimmie!
I have been pinning much of what you mention on your blog and your Flickr and Squidoo accounts, with direct links back to you. Have also been singing your praises about your Notebooking Success eBook. I have mentioned that you gave me the privilege of letting me preview the rough draft of this great resource. Am so happy that you now have it out there for sale and have been encouraging followers and friends to buy it from you! Hope that all is well. Have not been blogging, as am still dealing with health issues here. But have been pinning like crazy, as it gives me something to do while at the doctors, etc.
Have a happy week and thank you for shedding so much light on the topic of notebooking! We really look to you for ideas on how to make this work for our boys here:) Colleen

When you started math notebooking, did you follow a math book, living books, or on your own? Would a math dictionary be a good start. I actually have two. So I was thinking of pulling them off the shelf, and using them with living books from the library instead of the boring math pages. What do you think? Oh, I was also thinking if this would be good for pre-algebra so my son could really remember all the math operations. Thanks!

I love your approach! I think it would work beautifully. In fact, I’d love to hear all about it. So please blog it! (And email me when you do.)

When we started math notebooking, we were making a shift to a more living approach versus traditional textbook. You can read about that transition.

Math notebooking would work for any level of math. And, yes, it should increase retention.

We have been using A Beka (blah) this year for second grade and sometimes instead of the worksheets, I’d have my dd do a notebooking page. We’ve done graphing, addition/subtraction facts and fractions. I would have never had attempted it if it hadn’t had been for your ebook, Notebooking Success.
I want to get to the point where we don’t (or almost don’t) use the worksheets at all. We’ll see what happens next year. 🙂