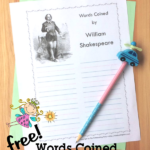 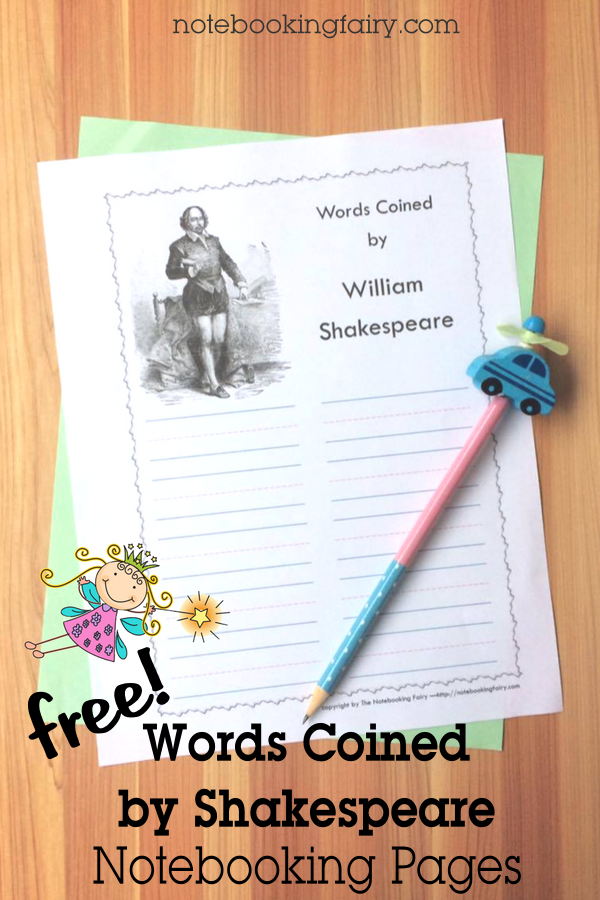 Welcome to The Notebooking Fairy! My mission is to teach you how to notebook and give you lots of free printables to notebook with. Every now and then I’ll sprinkle in some pixie dust to make things extra special.

I thought it only fitting to honor a literary giant — Shakespeare–in my first post on this new blog.

And since I’m using the word notebook as a verb, it’s doubly fitting that my very first free printable is about Shakespeare’s coining of new words.

to notebook: (verb) to put written ideas, drawn or printed images, and other relevant things into a notebook as a record of learning; often used in homeschool.

We’ve been working through William Shakespeare and His Dramatic Acts, part of the Dead Famous series. This book is a funny and often irreverent look at the Bard. When we got to the part about his coining words, Sprite was amazed at how many everyday words were made popular by William Shakespeare.

There are two notebooking layouts to record the words Shakespeare coined and the expressions he invented. Each of the two layouts is presented in three formats — manuscript ruled in 3/4″ and 1/2″ and super-wide ruled. (If you don’t want the manuscript lines to show up blue and red, simply adjust your print settings to print black only.)

After the Theater Printables

Nice work! Love your layouts. Now to remember them when we get to Shakespeare. 🙂

You can also save them to your computer and you’ll have them whenever you reach Shakespeare.

You are so incredibly generous! Thank you for sharing yet another wonderful resource. May God multiply to you one-hundred fold all you give to the homeschooling community so freely.

I’ve just found your blog via Barb at Harmony Art – wow! This is great.

Since finding you on the net, I’ve always appreciated the way you’ve shared your home-ed journey. And somehow this website makes all the ideas even more accessible to me… I sometimes feel like a bear of little brain, so keeping it simple suits me 🙂