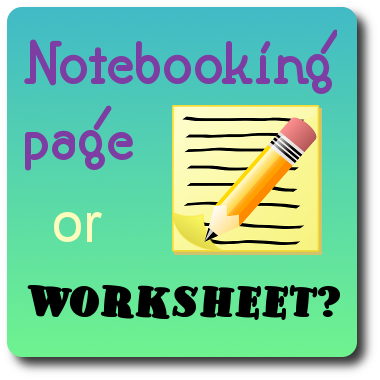 I am starting to notice a trend in homeschool curriculum — many publishers are offering lapbooks or notebook journals, specially designed for their curriculum.

Lapbooking and notebooking are popular learning methods among homeschoolers now, so it is not surprising that curriculum providers want to extend their marketability by offering lapbooks and notebooking pages.

I love it notebooking is getting attention as a valuable learning method. (It is.)

The problem is that some of what is called notebooking is really nothing more than a workbook.

What used to be called worksheets are now being billed as “notebooking pages.”  But the layout is the same as old fashioned workbooks–  comprehension questions and fill in the blank sentences with a few graphics as decoration.

The Problem with Workbooks

I will admit that I’m not a huge fan of workbooks. Although I have used an occasional workbook through the years, I tend to avoid them in favor of a combination of living books and authentic narration. In general, workbooks do not stimulate critical or creative thinking. Instead, they tend to spoon feed the learner with carefully constructed questions that do most of the thinking for the child.

The greatest benefit of notebooking is that a child uses his own words, images, ideas, and layouts to create a retelling of what his homeschool lesson included. The learning becomes his own as he chooses how to portray that.

How to Distinguish a Workbook from a Notebooking Journal

A workbook is regimented and has right and wrong answers. A notebook is fluid and full of alternative options for expressing the same academic concepts — just look at the 50 Things to Put in a Notebook for a sample of the variety that is possible.

A workbook has lots of text already on the page. The student merely completes what was started. A notebook journal is mostly blank so that the student creates the content.

Amy @ Hope Is the Word Reply

Excellent, Jimmie! Thanks so much for addressing this!

Here, here! That’s been a source of frustration for us too and one reason why we’ve mostly stuck with the tried-and-true like your pages, Notebooking Pages, and 2DynamicMoms.(The other reason of course being that the pages are so nice!)

I’m glad you addressed this, because I’m sure that some new homeschoolers in particular are confused by it.

AMEN! I first became concerned when I saw lapbooks turning into places to hold worksheets. To me, the beauty of a lapbook or a notebook is that it is created BY THE CHILD! Thanks for so eloquently stating your concern!!

Thanks for this…my plan is to learn all I can from you & really implement some notebooking in our school! Better late than never!

Jimmie ~ I really appreciate your thoughts on this. It is going to make me look at some of our notebooking more carefully.

Today my oldest completed her Robin Hood notebook and completed it by writing the epitaph for RH. This activity required such understanding of what we had read and such creativity. In no way could it compare to a list of multiple choice questions about the life of RH.

Notebooking is such a fabulous way to display your knowledge!

I know that the Apologia Junior Notebooking Journals aren’t TRULY only notebooking journals but we love them — they have true notebooking pages, and copywork pages, and yes some review questions, and diagrams to label, all in one place. They are actually what really introduced us to notebooking in a tangible way. Like, a notebooking stepping stone. I’d seen it around before that but couldn’t really figure out what it was or how to get into it. I love your site because I want to add so much more of this in the coming years. Your site gives me the information and the confidence I need to go for that!